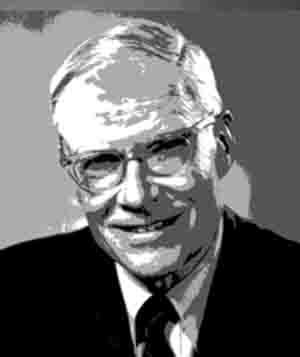 The one word that seems most appropriate to describe Dr. William O. Baker and his many contributions to humanity is “revered.” So significant was his counsel, wisdom, leadership, and guidance, that all the many people who knew him — in science, in government, at Bell Labs, in universities, and on governing boards — continue to have the highest respect and devotion to him.

Dr. Baker was a true “diplomat of science” — a “science patriot” — because of his significant contributions to the Nation; and a “science humanist” because of his advocacy of the use of science for the benefit of humanity. He was a trusted personal advisor on matters dealing with science and technology and national security to Presidents Eisenhower, Kennedy, Johnson, Nixon, and Ford.

William Oliver Baker, born in Quaker Neck, Maryland on July 15, 1915, was the vice president for research at Bell Telephone Laboratories during its golden period from 1955 to 1973, retiring as Chairman in 1980. During his leadership, the foundations of today’s digital era were initiated by researchers at Bell Labs. Dr. Baker came to Bell Labs in 1939, having just earned his doctorate in chemistry from Princeton University that year .

Dr. Baker was awarded both the Presidential National Medal of Science and the National Security Award. He received 27 honorary doctorates in recognition of his varied accomplishments.

Dr. Baker died on October 31, 2005 after many years of slowly declining health. He was active mentally and deeply concerned about his beloved Bell Labs and his many other interests till his very last days.

A book was published in 2011 to honor Dr. Baker. Following his wishes, the book attempts to tell the story of Bell Telephone Laboratories. The book and other biogrpahical materials relating to him are: